Led by an Oscar worthy performance from Joaquin Phoenix, Joker tells the origin story on screen of the iconic Batman villain. It’s not perfect by any means and there is warranted controversy surrounding its thematic message. However it is a compelling watch that is almost completely carried by Phoenix’s performance and a very well designed soundtrack, even if certain narrative elements make too big logical leaps to reach their conclusions. Following a less than stellar directorial career so far, Todd Philips directs Joaquin Phoenix through a gritty 70’s Scorsese style character piece with the ‘Joker’ character banner attached, set in an early 80’s Gotham City. Joker presents an origin story for the iconic Batman villain, which if you are aware of the character’s publication history, is generally something up for debate. Drawing very heavy inspiration from 70’s hits such as Taxi Driver and King of Comedy, Joker attempts to ground the larger than life character in gritty and ‘realistic’ beginnings. Whilst driven by an unsurprisingly excellent performance by Joaquin Phoenix, Joker‘s attempts to exist in a psuedo-real world are ultimately its downfall. Certain leaps in logic are made that detract from the film’s most shocking moments, reducing them to little more than self-justifying acts of martyr-ism for unjustifiable motives. Saying that however, Joker does present an ultimately enticing fantasy, even if that fantasy does leave you feeling a bit rotten for indulging it as the credits roll.

Joker follows Arthur Fleck, a wannabe comedian taking jobs as a clown for hire as he supports himself and his mother in their small apartment in Gotham City. Arthur is shown to suffer with mental illness, for which he takes medication, after having spent some time in a mental health facility prior to the film. Arthur’s symptoms include depression, delusions and the most prominent among them, a nervous tic that causes him to laugh uncontrollably during moments of intense emotional processing such as when he is scared, sad or uncomfortable, which is incredibly often due to the nature of the city around him.
Gotham is a mean place, and whilst this might not come as a surprise to anyone familiar with the fictional city, its never quite been realised like this on screen before. Gotham’s grime seeps from the screen, to the point when you can practically smell the abandoned rubbish that litters the streets. Antagonism, apathy and fear keep Gotham’s citizens locked in a state of perpetual savagery towards each other, with the rich able to hoist themselves above the muck, whilst those within push the weak to the very bottom.
That’s where Arthur fits in. His financial situation, line of work, mental illness and nervous tic set him up as a prime target for the bullies in society. He is relentlessly ridiculed, beaten and publicly humiliated multiple times over throughout the film until one day, he finally snaps.

The plot, whilst engaging, is quite predictable. As I mentioned, the film derives very heavy handed inspirations from Martin Scorsese’s Taxi Driver and King of Comedy, so if you are familiar with those works, you’ll see what’s coming quite often throughout. Even seemingly major plot twists are easily spotted prior to their actual happening due to the lack of originality in the narrative structure of certain story beats. However, regardless of its predictability the movie is far from boring. Phoenix’s performance is a must see, and carries the film for much of the two hour run time. The film does suffer from some awkward pacing occasionally but Phoenix is so engaging to watch, that you really don’t care. The slow descent from irritated rationalisation all the way to vengeful madness is extremely captivating. Phoenix expresses Fleck’s inner thoughts and feelings through grand body movements, so wonderfully weaved into the performance, that it is hard to resist being mesmirised by the painful beauty of his declination. Unfortunately the film around him isn’t quite believable enough to make this a masterpiece. As mentioned, there are several leaps in narrative logic that lead to major plot points in the film detracting from their impact. That is not to say that they don’t hit hard when they do come, but the lack of cohesion does raise questions of unrealised potential were more care taken with the narrative development. 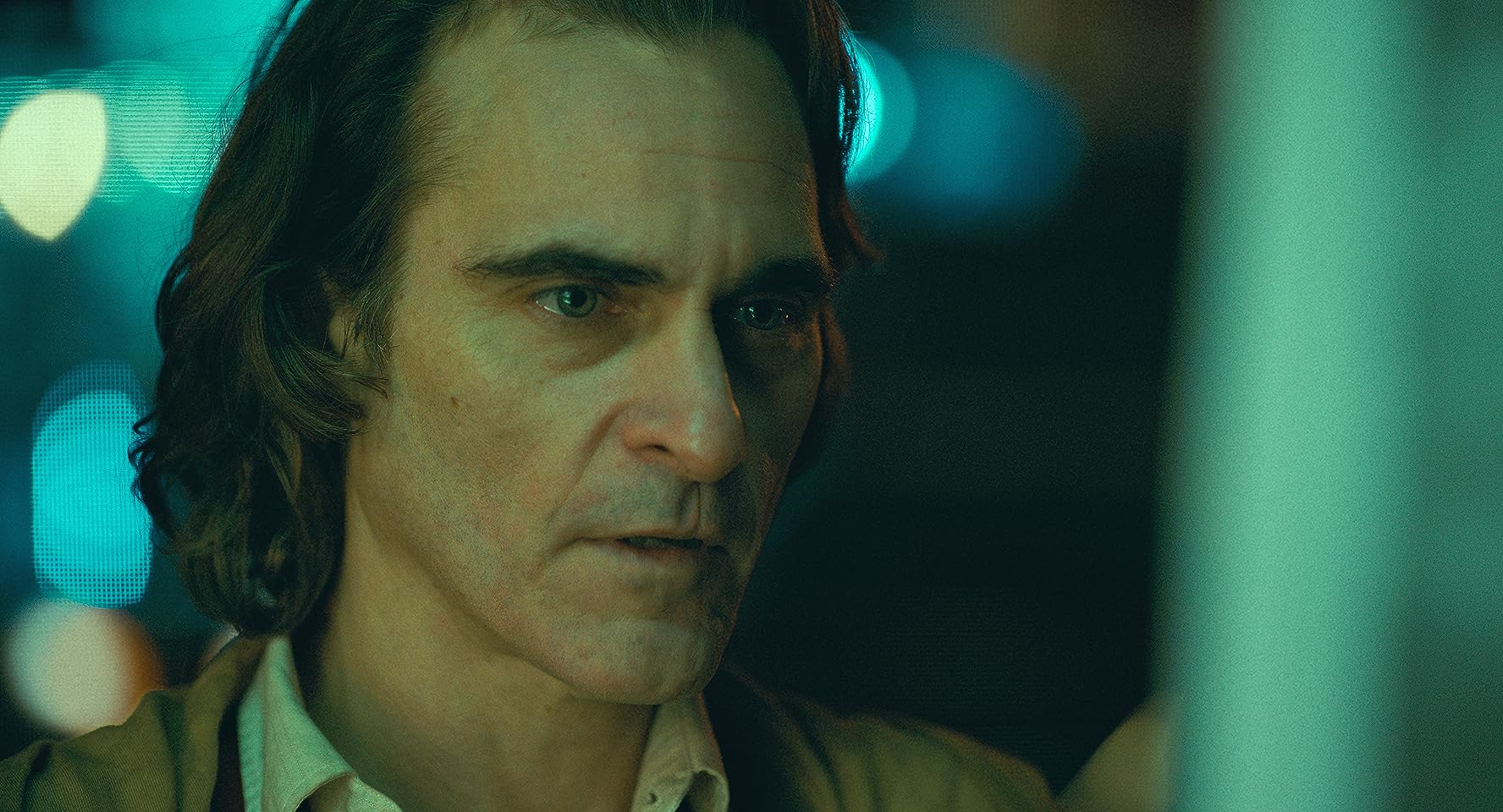 Technically the film is very well produced. Much of Gotham’s griminess comes from Lawrence Sher’s cinematography and colour choices throughout. Again, if you’ve seen Taxi Driver you’ll be very familiar with the colour pallet on offer. Neon greens and reds reflect the sickness within the city that produces monster’s like Joker, whilst mucky browns and dreary grays pressure the audience into the same sense of hopelessness that consumes Arthur. Jeff Groth’s editing is a bit of a weak point, resulting in odd pacing in some scenes, arguably done purposefully to make the audience as uncomfortable as possible but there is a fine line between discomfort and disengagement. What does standout however is Hildur Guonadottir’s soundtrack. Coming off the back of the incredible HBO series Chernobyl, Guonadottir is certainly starting to make waves in the industry and I would like to hear much more from her. Heavy string and wind instruments press the audience into Arthur’s perspective, pushing you down with him as he descends into insanity, quickly juxtaposing that with fun swing music, reflecting Arthur’s increasingly twisted sense of humour, culminating in a soundtrack that develops the character just as well as the performance does.

It is important to briefly touch on the controversy of the film, mostly to do with the problematic nature of the central arc of Arthur, and the takeaway theme of the film. Without spoiling the plot, Joker‘s tempting fantasy promises those who are down-trodden by society, that if they embrace their darkest sides, they will finally have all the things they desired, no longer victim to the social hierarchy they find themselves at the bottom of. The film also focuses in on a character that has, in the past, been identified with by certain internet based, violent hate groups and is rumored to have inspired public shootings.
Firstly, I strongly believe that it is important to have a consistent through line approach to this kind of controversy; that media alone does not result in violent outbreaks. Certain people from across all backgrounds are more susceptible to certain types of behaviour and can use media pieces as excuses that justify indulging in such behaviour. However it is also important to note that Joker‘s plot does lend itself to being used as an excuse for said indulgence. Joker effectively argues that if you are mentally ill and the system is failing you, embrace your alter ego, release your inner rage and lash back at those who have wronged you, and you will find that things will take a turn for the better.
On the other hand though, this is a film about one of the most notoriously violent and unhinged characters in all of fictional history. He often commits acts of massive random acts of violence and causes horrific pain simply because he thinks it is funny, the question does raise itself: What exactly were you expecting? 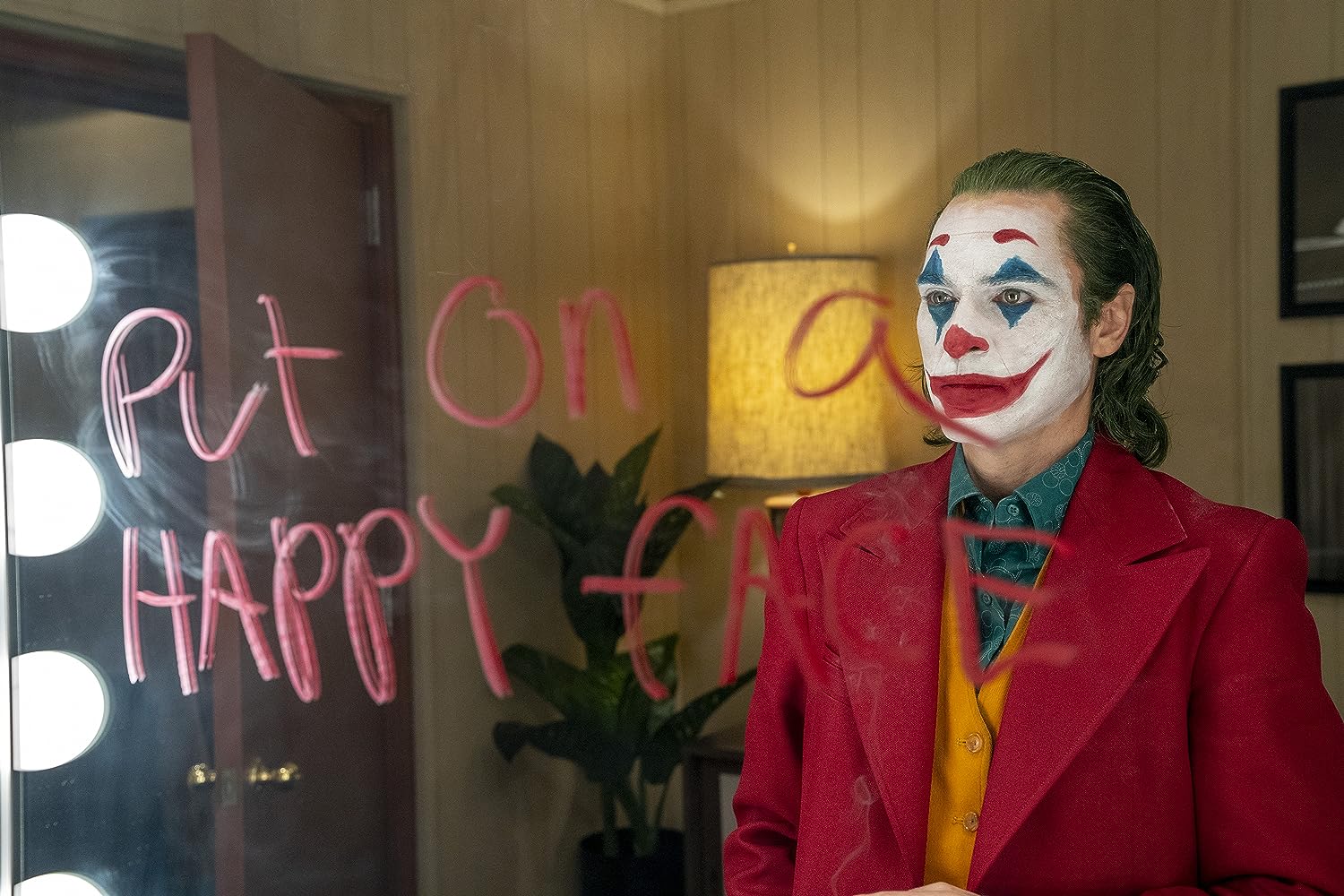 Whilst not entirely original in its structure, and slightly problematic in its narrative message, Joker does present an enjoyable character study of one of comic book’s most notorious villains. A very different Joker to any we’ve seen before, it is worth commending that even after nearly 80 years of publications, and multiple interpretations on screen, a new Joker has surfaced with Phoenix’s performance. The movie isn’t perfect, and there is a question of unrealised potential to do with the story itself, but Phoenix’s performance is enthralling and the soundtrack is perfectly designed to follow Arthur through his transformation, just be careful if you do decide to go and see it, it’s not exactly an easy watch, but it wouldn’t be a Joker movie if it was.