A powerful opener to one of the biggest comic book movie trilogies of all time and arguably one of the best trilogies of the decade. Reinventing Batman on screen Batman Begins created a noir hyper-realistic version of Gotham for Batman to exist in and set the scene for one of the greatest runs of a superhero on screen that the world had ever seen.

Following a run of quite terrible Batman films through the mid 90’s Warner Bros. Pictures and DC entertainment were looking to reinvent the familiar portrayal of Batman that had become campy, colourful and extremely silly (see George Clooney’s Bat-Costume nipples and Jim Carrey’s portrayal of the Riddler) and change it into something darker and grittier, a decision that would come to redefine comic book films, especially DC comic book films, for the next 12 years. The result was bringing on fairly underground indie director Christopher Nolan for a set of three films, that would share themes across three separate stories as Batman attempts to retake control of Gotham, bring it to order and purge the chaos and violence that rules its streets.

The first in the trilogy was Batman Begins. Showcasing a greater depth to the Batman origin story that had been explored on screen before, Begins shares a lot of similarities to Batman: Year One (Frank Miller, David Mazzucchelli, 1987), a comic book arc that explores Bruce Wayne’s first year as Batman as he attempts to tear down the major crime syndicates in control of Gotham at the time. Where the plot differs however is how Bruce Wayne became the one man hand to hand army that he was to be famous for.
Told through flashbacks inter-cut with modern day occurrences Bruce Wayne’s journey to becoming Batman begins with him as a boy. Chasing his childhood friend Rachel through his garden and eventually hiding on top of a disused well. The top of the well gives way and Bruce falls and is subsequently attacked by bats, causing him to develop a phobia of the nocturnal animal. Thomas Wayne (Bruce’s father) attempts to reconcile him, explaining that the bats only attacked him out of fear (outlining one of the film’s major themes).
In the modern day Bruce is found in a Bhutan prison by Ducard, a speaker for Ra’s Al Ghul who promises to train him in the art of fighting injustice and to set him on a path. Bruce subsequently climbs a mountain to deliver a blue flower as patronage to Ra’s Al Ghul, showing his strength of mind and body and his commitment to the pursuit of justice.

The plot is a standout achievement in comic book films for its time. There had not been a comic book character or franchise taken this seriously on screen in decades and the pay off is fantastic. Much less complex in its themes and much more deliberate in its delivery of them than the subsequent films in the franchise, Batman Begins is exactly the re-invigoration that comic book films needed at this point in the mid 2000’s. Marvel Entertainment had its power house Spider-Man franchise on the go set in its ultra wacky comic book version of New York. What Batman Begins offered was a noir hyper-realistic version of characters, settings and scenarios that comic book lovers were all too familiar with. Batman Begins asked the audience questions and challenged them to engage with its overarching themes instead of just being a showy action movie that featured DC characters. It was a risk on Warner Bros. part and it absolutely payed off.

It is not without its issues however. The plot often is guilty of holding the audience’s hand too much as it drives its major themes into the minds of those viewing, not really giving them enough credit to figure it out themselves. There’s also an odd recurring aspect to the film as characters consistently repeat (often in painfully smug ways) lines from other characters earlier in the film as a way of showing power shifting or revealing information in a subtle way. Whilst initially a clever aspect it happens so many times that by the last occurrence it is incredibly jarring and cringe-worthy. However regardless of these points the plot is still an outstanding success and something that truly separates itself from other comic book movies of the time.

Christian Bale being brought on as Batman was an interesting choice but one that did turn out to be a correct one. His portrayal of Bruce Wayne deserves much more credit than his portrayal of Batman does. He captures the elegance and frustrations of a young man famous for his family line and balances that well with the development into an idealistic crime fighter. His Batman lacks an acrobatic ability and moves a bit like a tank but that simply goes hand in hand with the hyper-realistic nature of the franchise. Michael Cane and Morgan Freeman do wonderful jobs as Alfred Pennyworth and Lucius Fox respectively, guiding a young Batman through his first major challenge, just as Gary Oldman does a great job as the young and idealistic cop Jim Gordon. The casting overall was definitely one of the best points of this franchise, as these actors would go on to be major parts of a larger trilogy, all needing to engage with the development of their characters and the development of the world they exist in.

Wally Pfister and Lee Smith were brought on as the Cinematographer and Editor respectively and both deserve massive credit for the visual standard of this film. Lee Smith’s pacing keeps the plot moving at an agreeable speed without moving too fast and Pfister’s capturing of the scenes makes for some quite visually incredible moments. Begins absolutely has the overall best action scenes of the franchise and is much more an action film than the subsequent films would turn out to be. Drawing on the Year One inspirations, Batman is still new to this game and isn’t quite up to the standard that he would become. Several scenes show him falling and injuring himself (one in particular is almost shot for shot out of Year One), making himself too visible to on-lookers, and at times needlessly endangering the lives of innocence. The tension that these factors bring into the plot create some of the best comic book movie action scenes of the decade and are without a doubt the highlight of this film. 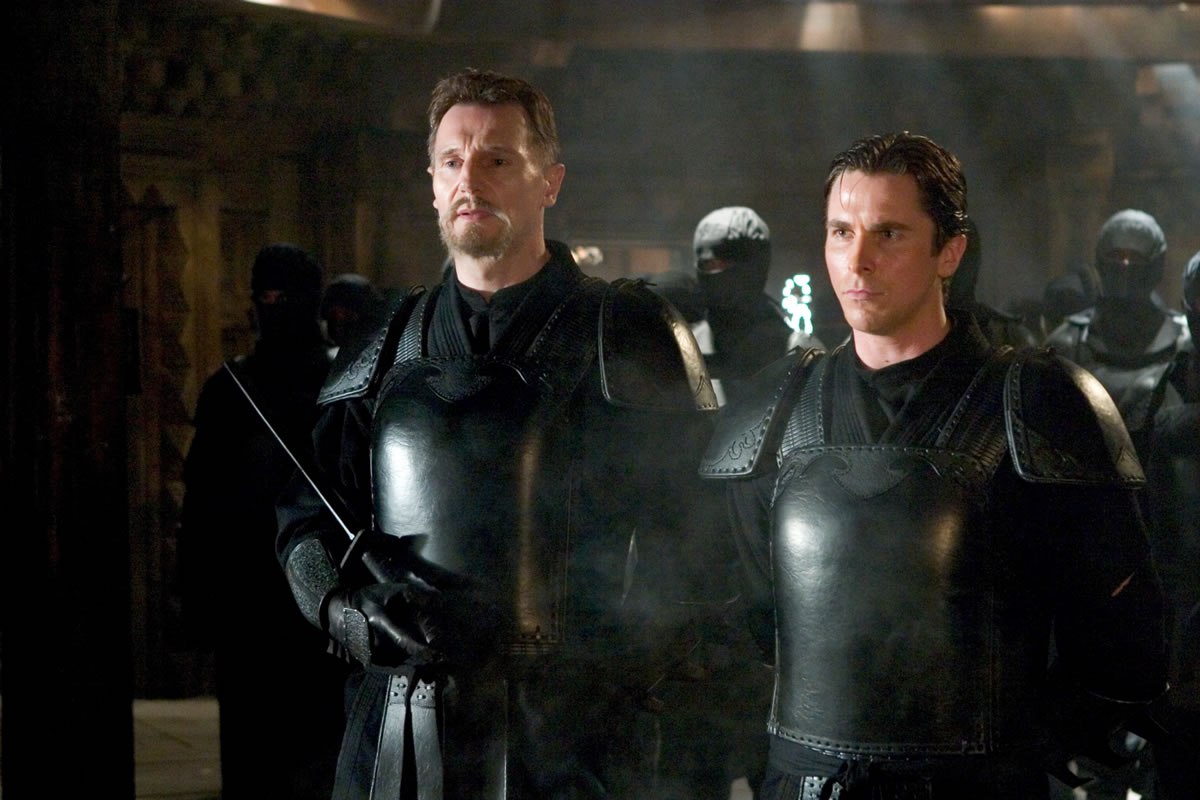 Batman Begins kicked off what was to become one of the most important trilogies of the decade and absolutely one of the best comic book movie franchises of all time. It was worthy of standing up to Sam Raimi’s Spider-Man trilogy and blew the established X-Men franchise of the time out of the water. Batman Begins would set the tone for comic book movies over the next 12 years. Great action, strong themes and worthwhile complexity allow it to stand away from its comic book roots and exist on its own terms. This wasn’t just a film for Batman fans, this was a film for movie fans.